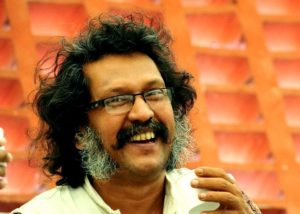 Twelve title or twelve segments selected from the stories of M.T. Vasudevan Nair give a complete picture of the contemporary social situation of Kerala as experienced by M.T. The first segment of the play deals with the story Nalukettu. It throws light on the heinous nature of the conventional joint family system. The inhuman treatment towards circus artistes is pictured in the story Valarthu Mrigangal with utmost sympathy and deep feeling. Iruttinte Atmavu has a different voice where madness is proved to be sobriety. The cruelty of the upper class society denying the right of survival of a girl is apparent in the touching anecdote of Kuttyedathy. The character Sethu in the story Kalam contains the subjective feelings and reactions of the author himself. The challenge faced by a slave girl in her attempt to survive is the central theme of Daya which is an adaptation of a story from The Arabian Nights. Amorous pleasure in waiting for the reunion of Vimal and Budhu is seen in the story Manju. In Randamoozham (second turn) a different interpretation of Bhima is attempted. Gopuranadayil is a modern style of absurd drama. Vadakkan Veera Gadha tries to convince that the Chandu’s action does not amount to deception. The possessed hero of Nirmalyam depicts the state of helplessness. The social change brought out by Nair Regulation Act-1925 adversely affecting a section of people, especially children, is dramatically represented in Asuravith.

Primarily this play develops through a collage of acting styles. The great writer M.T Vasudevan Nair’s style of writing, his thinking, and the period of creation are reflected as they were. The production has been moulded through 12 different treatment styles. Intimate theatre school is one among them. Traditional acting techniques of Koodiyattam and Kathakali are also incorporated to highlight certain sequences. All the 12 stories are developed through beautiful imagery. It is an honour that Kerala Government has decided to archive this production.

Prasanth Narayanan is a Kathakali artist, journalist, dramatist, director, actor and orator. He has written around 30 plays and received many awards and recognitions including Sangeet Natak Academy, Durgadatha Puraskar, A.P. Kalakkada Award, and Abudhabi Sakthi Award. The legacy of his father Vellayani Narayanan Nair, author of 14 Kathakali plays, and his grandfather, the Sanskrit scholar G. Ramakrishna Pillai, is the leading light for the creative contributions of Prasanth Narayanan.

V R Sudheesh wrote in the Balapankthi of the Mathrubumi Weekly, Chandrika Weekly and Desabhimani weekly. His early stories are in the main stage of the transformation of the modern story in Malayalam. He has received many awards including the Thoppil Ravi Award, Ayanam CV Sree Raman Award, etc.

Kalam Theatre and Repertory, Kerala is a theatre group founded under the leadership of renowned poet and critic Smt. Kala Savithri in 2016 at Thiruvananthapuram. It aims to introduce the artistic vision of one of the leading theatre activists Prasanth Narayanan, to the world. It comprises of an acting school, theatre and repertory. The group also has periodicals and publications. Kannada theatre maestro K. G. Krishnamoorthy is heading the acting school. The centre is working under the guidance of Dr. P. Balashankar Mannath, former Director of the National Centre for Kutiyattam.