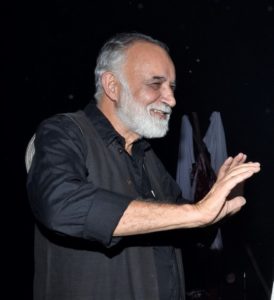 The Play and Director’s Note

This is a dialogue between two great minds of the 20th century – Mahatama Gandhi and Rabindranath Tagore. A dialogue, which has direct bearing on the future of India and the rest of mankind. The quality of the dialogue is intense, philosophical, spiritual, aesthetic and highly political. Yet this dialogue of agreements and disagreements through letters and articles between the Mahatama and Gurudev, never lowers itself to the realm of anger, negativity or animosity. There is tremendous love, admiration, camaraderie and respect for the other’s point of view, which unfortunately is not a quality we find in the political class of today’s world. Hence, this dialogue between the Mahatama and The Poet is of great significance, an eye-opener and absolutely relevant to the present debate on the global world with neo-liberal modules of development and open market economy.

Graduate of National School of Drama with Best Actor’s Award is an actor, director, writer and media person. He has been working in theatre, cinema, television and media for the last five decades. He has directed more than 200 plays in various Indian languages. These productions include the works of Bhasa, Shakespeare, Gorky, Chekov, Bertolt Brecht, Tagore, Premchand, Badal Sircar, Bhishm Sahani, Dhramvir Bharati, Hazari Prasad Dwivedi, Manto, Moti Lal Kemmu and many more. Terror and violence ridden Kashmir has been his working space for more than 15 years, where he has revived and revitalized the traditional Kashmiri theatre called “Bhand Pather” which was disappearing under the pressure of violence and fundamentalism. Raina has travelled widely across globe for his theatre work, as a guest director and as a guest teacher. He has been working with National School of Drama, Hyderabad Central University, Indian Institute of Technology, Hyderabad and Bhilai. He has been Fellow at University of Hawaii (U.S.A.) and at Stanford University (U.S.A.). He has been scholar in residence at Jamia Millia Islamia Central University. Raina is a trustee of Safdar Hashmi Trust and South Asia Foundation, India. He has been recipient of many national & regional awards like Sanskriti Award, JK Gold Medal, Sahitya Kala Parishad Samman, Shikhar Samman (Hindi Academy, Delhi), B.V. Karanth Lifetime Achievement Award and Sangeet Natak Akademi Award.

Peoples Television’s journey started with the making of socially relevant documentaries, plays and cultural events. It has been a platform for the exchange of ideas on the burning issue of culture cutting across disciplines of arts. Our video films on the cultural heritage of Kashmir have been screened in many parts of India and in many countries of west and central Asia. People Television has also performed its theatre plays at major festivals in India like Kerala National Theatre Festival, Kashmir National Festival. Our work with children through workshops at various centres in India has earned Peoples Television a prestige position in the field of theatre in education.